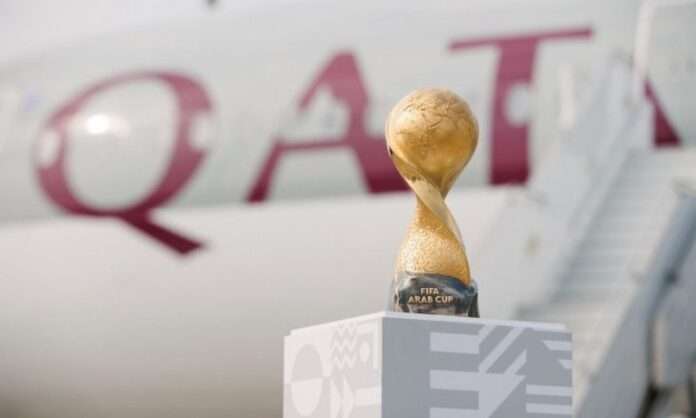 Qatar have decided eight months ago to run an Arab Cup as mini–World-Cup experience/test. That is part of their preparation for the big event the World Cup 2022, next year. This Arab cup that happening in Qatar now is the tenth edition of this type of tournament, the first Arab cup ever was held in 1963 in Lebanon country, and the last one before this one (ninth edition) took place in 2012 in the Kingdom od Saudi Arabia and was won by the Moroccan team. Unfortunately, many reasons caused in not having more Arab Cup tournaments, and the main reason is political issues, differences and instability in a lot of countries of the African and Asian Arabic. This is the best well organized Arab Cup ever, especially that the games are taking place on the World Cup stadiums, that Qatar recently finished building them. This event attracts all Arab people, and non-Arab even, because it is a very rarely event that allow for the African Arabic national teams to play against the Asian Arabic national teams. Sixteen Arabic countries out of 22, participated in this event; they were divided in 4 groups. After the tournament draw, group A had Qatar, Oman, Iraq and Bahrin. Group B had Tunisia, United Arab Emirates, Syria and Mauritania. Group C had Morocco, Jordan, Kingdom of Saudi Arabia and Palestine. The fourth group, group D had Egypt, Algeria, Lebanon and Sudan. The event is taking place between 30 Nov – 18 Dec 2021. As of the date of writing this article, Dec 8, they finished all the games of the group stage, and from each group, and the first and second teams will go to the quarter final. From group A, Qatar ranked first with 9 points from 3 matches, and Oman ranked the second with 4 points. From group B, Tunisia ranked the first with 6 points, and United Arab Emirates ranked the second with 6 points as well, but Tunisia had advantages from the number of goals they scored. From group C, Morocco ranked the first with full mark, 9 points, and Jordan secondly with 6 points. The last group D, Egypt and Algeria had 7 points each, the same number of goaled scored, but after resorting to the fair play system, it was found out that Algerian team had more yellow cards than the Egyptian team, in this case Egypt ranked first and Algeria second. At next stage, which is Quarter Final, first of group A will play against second of group B and so. Tunisia will play against Oman, Qatar against United Arab Emirates, Egypt against Jordan and Morocco against Algeria. Quarter final will take place on the 10th and 11th of Dec, then the Semi-final will be played on the 15th of Dec, and the match for third and fourth and the final will be held on the 18th of Dec. Qatar had encouraged the Arabic teams to participate in this event in many ways, but the main one was financially. The amount of money that Qatar paid was huge enough to help the Arabic countries to accept the invitation and participate in this FIFA Arab Cup. Qatar paid $500,000 American Dollars to all participated teams, $750,000 to all the teams who is qualified to the quarter final, $5 millions toward the winner of the tournament, $3 millions for the second place, $2 millions for the third and lastly $1,5 millions for the fourth place. Despite all these prizes, there are some teams have participated with their Olympic teams, such as Saudi Arabia, because they are focusing more on the world cup qualifications, so they do not want their first teams’ payers to get injured in this tournament and lose them for later matches.

Lastly, about the trophy, the FIFA Arab Cup trophy was made in London, Britain. They mad it of pure gold. It has on it a map of the Arab world, and the word “Mawtani” which mean in English my homeland/country. Mawtani is a popular patriotic poem written in the 1930s. Mawtani word was written beside the name of the tournament. Myself, I cannot wait to watch the rest of this tournament, so if you did not watch any match of this tournament yet, there are still many matches left.