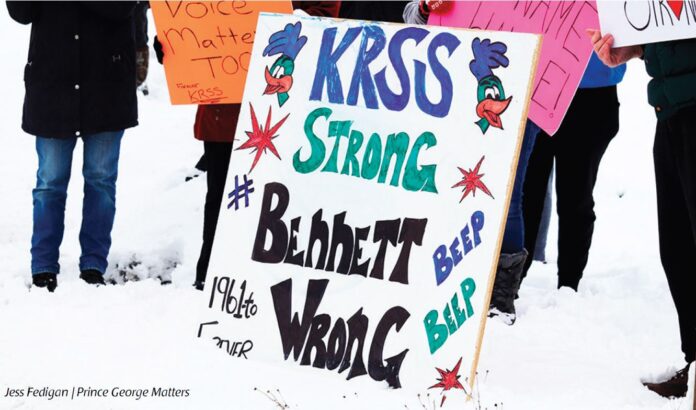 Kelly Road Secondary School has been a part of Prince George for over 50 years. It was named in recognition of John Kelly who was an early pioneer in Prince George that helped construct the original Kelly Road. The name has been an important point of history for many who have attended or worked at the school of over 1000 students. The school will be moving locations as a newly constructed building will be up and running in September 2020, but due to recent activities it may not be keeping its original name as was initially planned. On February 26th at their meeting, the School District 57 (SD 57) Board of Education voted unanimously to change the long-standing name of Kelly Road Secondary School to Shas Ti Secondary School. The name change came from the request of Lheidli T’enneh First Nation Elders, who proposed the Dakelh name of Shas Ti meaning “grizzly bear trail”, as the location of the school will be on an old populous grizzly bear habitat. Trustee Trent Derrick has stated that the new name will “honour the history of the Lheidli T’enneh” and will also aid SD 57 in truth and reconciliation with them as well. While popular with all members attending this meeting, the announcement was not taken very well by many members of the Prince George community.

A large part of the community is not very happy with the proposed motion to change the name of Kelly Road Secondary School. Many are upset that that the community was not consulted or involved with the decision, as they are the ones with the largest ties to the school. Students and staff took to the streets in protest with signs showing their support to keep the previous name. An online petition was created speaking out against the name change, accumulating over 9000 signatures in just 3 days. Most are not opposed to the idea of learning of the history and culture of the Lheidli T’enneh but feel as though this is not the appropriate way in doing so. Instead of outright changing the name of Kelly Road, propositions have been made to incorporate the language of the Dakelh as a component of the school itself, such as the Shas Ti Library or Cafeteria. This way not only is the legacy of Kelly Road retained but also the Lheidli T’enneh can simultaneously share their culture. An idea has also been put out that instead of using one name or the other, simply combining the two and becoming the Kelly Road Shas TI Secondary School. This would show that not only is SD 57 attempting to make reconciliation, but that it is possible to honour both histories at the same time.

Is this change of name setting a bad precedent for the act of truth and reconciliation with the Lheidli T’enneh First Nations? Chair of the board Tim Bennett has made it clear that reconciliation with the Lheidli T’enneh is taking top priority over anything else. “We know that Kelly Road has a history and legacy in this district”, “but I also believe it’s the right thing to do”. Is this really the best course of action for aiding in acts of reconciliation? The irony is that in order to try to help promote and share the history of the Lheidli T’enneh, they are discounting the history that comes with Kelly Road. Many are arguing that the only reason the School District is going about this change is to garner favour with First Nations and make themselves look better.

A common argument with those who have no connection to the school is that “It’s just a name, who cares what the school is called, it doesn’t hurt anyone”. If this is the case, then how would giving an established high school a Dekelh name help reconciliation efforts with the Lheidli T’enneh? If the goal is to help keep the language active, there are certainly better alternatives than just renaming the school entirely. A common misconception is that the change of name is going to cost a lot of money. According to the official Kelly Road Secondary School website FAQ section, “The process of a name change is actually cost neutral at this time”.

While the change in name is not official at the time this article is written, and the SD 57 board has made a statement  that there will be future consultations with the community, it does not seem to be boding well for those in favor of Kelly Road. Lheidli T’enneh Nation Chief Clay Pountney has stated that the reason for bringing the name change forward was as follows “We’re kind of reasserting ourselves, and it might be new to some people,” he stated, along with “Lheidli has been there for forever. It’s always been our territory.” Is this name going to be changed because the Lheidli T’enneh history is receiving priority for being First Nations? Prince George will have to wait and see.