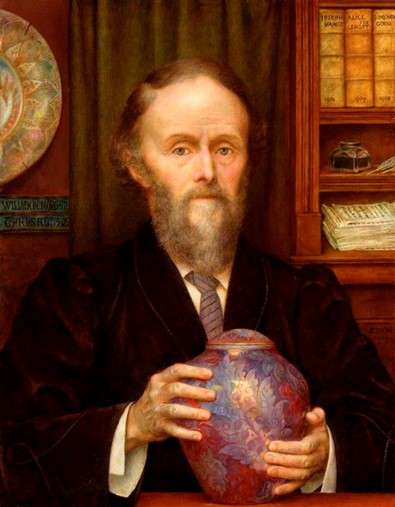 As someone who often finds paintings, thinks “heh, that’s funny” and then researches them as much as possible, I would like to share a particularly bitter truth of my trade: The more you know about a painting, the less funny it seems. I will illustrate the point by discussing this portrait by Pre-Raphaelite Evelyn de Morgan of her husband, William.

My first impression upon seeing this image was “Aha! De Morgan has painted her husband clutching the urn she has promised he’ll wind up in if he ever again uses the phrase “probably good enough” to describe one of her paintings.”

And that struck me as funny.

What possible reason would there be for a man to be illustrated clutching an urn?

Well, perhaps if I knew the first thing about the history of pottery, I would understand that William de Morgan played a not insignificant role during the Arts and Crafts Movement in England by reviving the art (and craft) of “lustreware” – a practice whereby a crockery objet d’art is finished with a metallic, iridescent glaze. It seems that Mr. De Morgan was really good at this. He was also really good at writing and Mrs. De Morgan has, kindly, placed several of her husband’s better-known novels on the bookshelf behind him.

Even though he is the subject of the work, I should be loath to discuss the artist’s husband more than the artist herself. Evelyn de Morgan was a pioneer whose entrance into the almost exclusively masculine world of professional art was only made possible by her remarkable ability and tireless work ethic. To be perfectly honest, if I was attempting to present the stunning talent of this woman, this is one of the last paintings I would choose as it does a far better job of showcasing her love for her husband than her competence as a painter.

I trust you see my point now. I think it is pretty clear that the snarky, cheeky attitude with which I originally approached this work has been overtaken and boarded by piratical sentiments of admiration, curiosity and respect. What a woman! What a man! What a marriage! What a vase!

The price of this change of heart? Humour. That’s the price. I am so terribly sorry.