Standing Still: Who’s Side Are You On? 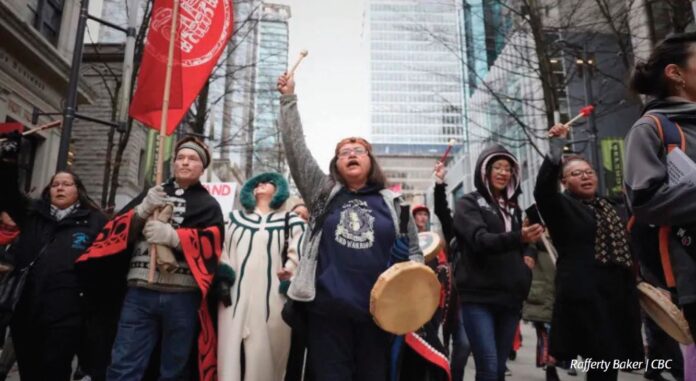 I write this article from my home in Prince George, British Columbia. I sit comfortably, my dogs on the floor in front of the couch, the sound of my television running in the background. There is nobody at my front door, telling me that this is no longer my home. My landlord is not barricading my street, calling into my living room by megaphone that I have a limited amount of time to vacate the premises before force will be used. In fact, even if I were being evicted, my landlord would have to file officially through several channels before they would be allowed to take action remotely close to using force to remove me from my home. All of that effort, and I am just a renter here. Nobody acknowledges my unceded and ancestral land when they visit here, because I do not own this land, or this duplex. I just live on it.

I think about these things and I wonder to myself, what if I really did own this land? What if, for hundreds and thousands of years before, my family had lived on this land. Furthermore, what if they had spent those many years learning how to protect the land? Truthfully, I feel that my reaction to a landlord telling me to leave the land would probably be fairly volatile. I would feel a sense of familial ownership. A sense of tradition. A sense of safety.

Now, I think about how approximately 400 kilometers north-west of Prince George, this exact story is playing out. The Wet’suwet’en refusal to leave their territory to allow the Coastal GasLink Pipeline construction to begin has sparked emotional, political, and societal responses across Canada. It has been nearly two weeks since these protests started making national news, but this issue has been boiling in Western Canada for some time now. Many news sources state that “tensions have been escalating since December 31st, when the B. C. Supreme Court granted Coastal GasLink an expanded injunction against the Wet’suwet’en Nation members blocking access to the project” (Bogat, Feb. 10 2020, CTV News). As someone who lives just a few hours away from the conflict, I can tell you that the tensions have been there for quite some time. The Wet’suwet’en have made it clear through protests, social media, and public forum that the pipeline is outside of their interest, but nobody has been listening.

For many who are following the news of the rail blockades that have been popping up nation-wide, the reaction has been one of disdain for the Wet’suwet’en people. Any quick browse through Facebook shows that there is a distinct push against these protests because the blockage of railways means a great deal of discomfort for the stakeholders involved in major rails such as CN and various transit companies. My question is this: are the blockades really the problem? Or is the problem the idea that Canada, as a country and a government entity, is certainly capable of going through the motions of being a polite nation without actually meaning it?

It is clear that during the course of this “provincial” altercation with the Wet’suwet’en people, news of its national affect have reached the ears of Prime Minister Trudeau. At a press conference in Ottawa on February 21st, the Prime Minister stated that “Every attempt at dialogue has been made but discussions have not been productive. We cannot have dialogue when only one party is coming to the table” (Connolly, February 21 2020, Global News). But, in a country where it has become commonplace to acknowledge the ancestral, traditional, and unceded territories of our First Nations people, why are these talks only happening now, many months after the first time the Wet’suwet’en people stated their distaste for the pipeline as far back as 2018. It feels funny that we can acknowledge the place, but not the people. The result of this federal ignorance is no laughing matter, though, as the nation now faces a critical moment in our Canadian soon-to-be-history. I am sure I’m not the only person whose breath shortened when news of the recent Tyendinaga rail blockade on Mohawk territory being dismantled by OPP officers was announced. For anyone who remembers the tragedy that was (and still is) the Oka Crisis in July of 1990, these pipeline protests might feel like they are verging on a similar level of uncertainty and danger.

The truth is, these violent infractions are now present on both sides. There have been reports of protesters at the B. C. Legislature buildings in Victoria physically attacking and spitting on people on their way to work in the government buildings. While I believe the way our federal and provincial governments are working with (or not, really) the Wet’suwet’en people is highly inappropriate, I do not believe the answer is in violence towards folks on their way to work in our province’s capital. If respectful discourse is what we are looking for, then the best course of action would be to lead by example, no matter how difficult that might seem at the time.

While I acknowledge that this article presents a very specific bias to the issues at hand, I think that the most important thing for all of us to do, whether you agree with me or not, is to be paying attention to what is happening around us. We live in a world where we ask others to acknowledge the people, place, and land that make up our personal identities. We each respond to a national discourse on truth and reconciliation, expressing our truths as part of a conversation that took decades to begin. We look for justice in our own lives, but question where to draw the line when it comes to justice for other people. All I ask of you, the person reading this article, is that you begin to ask yourself what your take-away is from the situation that has befallen the Wet’suwet’en peoples. What is this issue really about? Railway blockades? Provincial pipeline standards? Environmental sustainability? Basic human rights?

I don’t think we will be able to address the problem until we can identify what it is, and I don’t believe we should be starting by picking sides, no matter how hard that might be. I will always stand with those whose rights have been taken away, but we should keep in mind that there are two sides to every story. In this case, the inability to foster meaningful discussion between our government and our First Nations people has led to national consequences. Until we are able to listen to each other and figure out the roots of our problems together, this issue will be impossible to solve. Listen. Research. Ask questions. Engage.