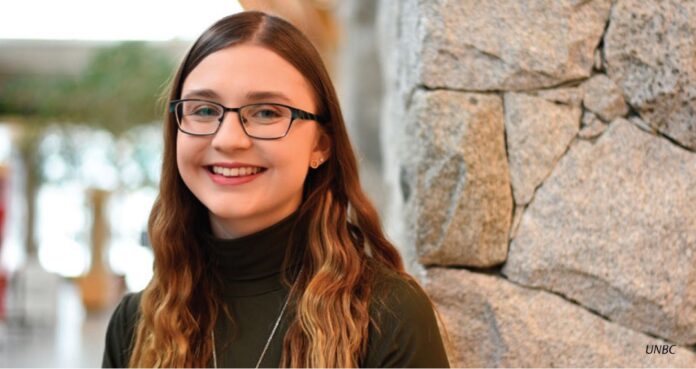 When you think of poetry, who comes to mind? Shakespeare or Woodsworth? Perhaps that question might be a bit difficult if you have never taken the time to enjoy a good ol’ English poem. Have you ever tried to write poetry? Writing poetry is difficult for many, but for UNBC’s Briana Greer, she is about to have a Japanese poem she wrote published in a collection of Japanese poems called The Shortest Letter of Japan: Season. Over 32,000 submissions were made and only 145 were selected, including Briana’s poem. She was the only non-Japanese resident chosen, which only further demonstrates how far she has come in learning and applying Japanese. Only one other prior UNBC student has had their work selected for publication as part of this competition. Briana Greer is a third year Global and International Studies student at UNBC.

So, you may be wondering, what was this poem about? The topic for the competition was seasons. Contestants were limited to using only 40 Japanese characters. Her poem was about sitting close to the fire on a cold winter day, wishing to be with her love. Briana told me that although she had spent much time articulating her thoughts for the poem, she had submitted the poem at the last minute and didn’t really think much about it afterwards. It has been a dream come true for her to be recognized internationally for her poem. Briana has been invited to attend an awards ceremony in Japan on April 26th, but unfortunately will be unable to attend due to the short notice and cost.

As a friend of Briana for many years now, it is so exciting to see her excel in a language she has put in so much time and effort to learn. Each semester she is hesitant to take the next level of Japanese, but always ends up registering for the next Japanese course she can take. She loves to push herself and is always up to the challenge. Even one day she was trying to teach me some Japanese, but I just don’t think I have the motivation to learn another language ☺ I’m incredibly proud of my great friend – and I can’t wait to get a hold of this book she’s published in (even though I probably will never be able to read it myself!).

What is more important for your future GPA or experience?