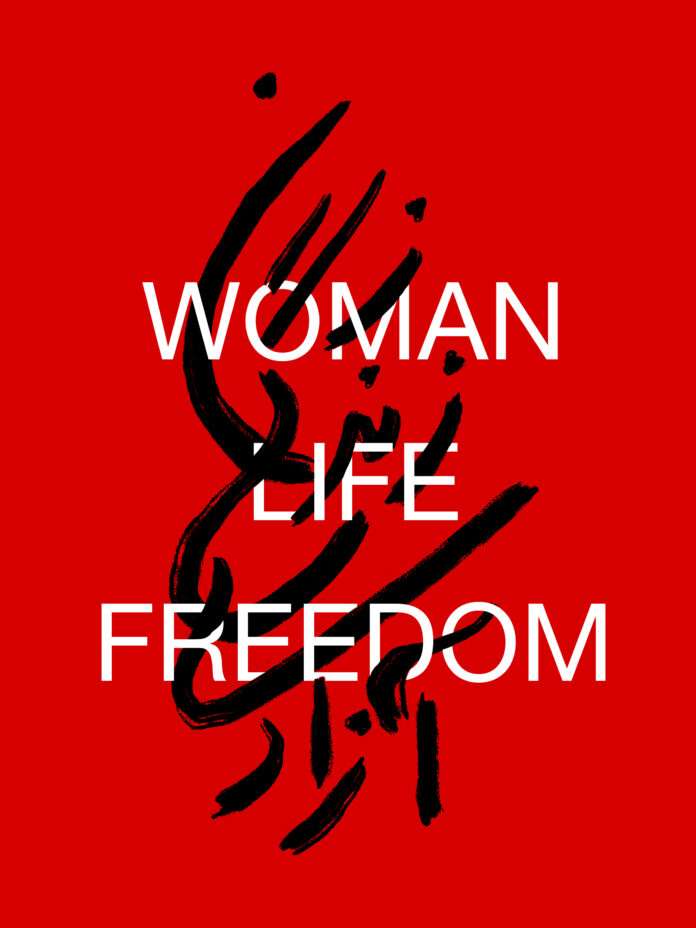 The slogan is Kurdish and has its origins in the Kurdish Freedom Movement, with its emphasis on women’s freedom and the struggle for self-determination. The protests have spread across Iran and have been especially strong in the Kurdish areas. It speaks to the intersections of oppressions faced by the Kurdish woman Mahsa Zhina Amini, whose death after being taken into custody by “morality police”, was the spark of the uprising. And it speaks to the importance of intersectionality in feminism.

Not only as an Iranian, but beyond that, as a human being, I feel the responsibility to raise awareness about what is happening in Iran. Iranian youth, women, and even kids, are making the ultimate sacrifice to free their country from the oppressor dictatorship of the Islamic Regime.

Iran may seem small, but it is one of the largest countries in the world. It also houses a whopping 10 percent of the world’s oil—double that of Russia. To put it simply, oil equals money. The regime in control of Iran is called the Islamic Republic, and they are in power, despite the fact that the majority of Iranians don’t want them to be.

What is happening in Iran? Taking Iran back from the Ayatollahs

For 43 years, the Islamic Regime in Iran, founded by Ayatollah Khomeini and currently led by Ayatollah Khamenei (the current supreme leader), has overseen the brutal and systemic persecution of its own people, torturing, raping, and killing civilians who oppose the regime.

When they took over the power in 1979, the first thing they did was come for women’s bodily autonomy by mandating that women wear the hijab. Thousands of women took to the streets to protest this. These brave women were met with public beatings, creating a fear of dissent that has remained a pillar of the regime’s power.

Under Khomeini, women went from being senators to not being allowed to jog in public. He chipped away at their rights—slowly and then rapidly (this is how it happens, so please vote!). It has now been 43 years and Iranians are still living under the thumb of these goons. Given recent history in America, it’s somewhat easier to see how unpopular tyrants with unpopular religious beliefs can rule over a majority that doesn’t want them.

Iranian women never accepted the regime’s gender apartheid. They have risen up many times, but every movement has been met with brutal crackdowns. During an uprising in 2019, the regime shut off the internet and killed over 1,500 people in three days. Without internet access, news of this massacre could not reach the rest of the world to stir up an international outcry. It felt like all was lost.

And then, a glimmer of change came a few weeks ago in September. Another civilian uprising was sparked, this time after the regime murdered a young woman named Mahsa Zhina Amini for showing a few strands of hair under her hijab. Protests erupted, and, like always, the regime’s crackdown was swift and deadly.

Except this time, Iranians didn’t back down. Despite tear gas, water cannons, arrests, and death, people continued to pour into the streets chanting for freedom and an end to this regime.

The regime ratcheted up their crackdowns, arresting public figures and killing children and mothers. But this has only backfired, because every new atrocity they commit only fuels the fire in Iranians’ hearts. Iran luckily has a well-educated population, in which women constitute a majority of university graduates. And yet the regime is led by a small group of old men with social attitudes several generations out of date. The people want freedom, and they have made it clear that they are never going back.

We are now on day 70+, and the uprising has turned into a nationwide revolution with Iranian women and girls at the forefront. It is the single biggest challenge to the regime’s power since its inception, but it is also the first woman-led revolution in modern history. The scenes coming out of Iran right now are astonishing. We are seeing 13-year-old girls throw water bottles and chant “dishonorable!” at regime officials, bullying them off their middle school grounds. We are seeing university students break down makeshift barriers made by police to keep women out of gender-segregated canteens. The entire country—men, women, old, young, rich, poor, religious, non-religious—are united behind one singular goal: to defeat this regime and win back their secular democracy.

This is not a war on Islam

It is my responisibilty to mention that this is not a war on Islam; it’s a war on those who use religion as a manipulative tool, interpreting it wrongfully to their own benefit to control and exert power over the masses. The act of burning hijab or knocking off a turban by iranain people is not an attack on islam or muslims. It is a symbolic act to demonstrate freedom from decades of oppression in the hands of dictators and death to the false use of religion to control the masses. The islamic regime has used religion as a manipulative tool for opperassion. Obligatory hijab for women serves as a daily visible sign of their control over the bodies of iranian women. The mullah’s wearing their turbans are not truly in the name of religion but serve more as a walking symbols of their political authority and power the people. Just like taliban they are not muslims nor are they true representatives of islam. They have twisted the religion to echo their own self interests and to bolster their power over the iranian people. Their laws are filled with hypocrisy where their own children live freely with no hijab in western countries, yet they make other people’s children wear hijab and chant “Death to America!”

As an Iranian, I want to say that, if you do witness Iranians criticizing “religion,” let me remind you of the psychology of hatred. The extreme feeling amongst most Iranians comes from the perception of their own personal history under oppression. The anger that begins to grow, from said oppression, affects the victims emotions, personality and identity; which again is not unique to Islam, or to Iran for that matter. Religious trauma occurs in any community where a set of manipulated ideologies are forced upon you.

Lets write the history together

We’re facing the Iran’s story’s climax now, but I’m asking all of you to help us write this ending. You can do this by spreading awareness about Iran online and offline. The villains in the regime have banked on you and the rest of the world not caring enough about Iranians to pay attention to their fight. Same thing to my Ukrianian and Afghanistan brothers and sisters. Be their voice! Make your representatives accountable for their actions and lobbies. Take away the regime’s weapon of secrecy. They can only commit their atrocities in the shadows; so the more we shed a spotlight on Iran, Ukraine or Afghanistan (etc) the more accountability these regimes must contend with.

Let’s send a reminder to all dictators and politicians that we, the people, are in charge. Your voice counts and we need you.

I wanted to use this opportunity to thank every single of you that showed up at the “Solidarity with Iranian Women” on November 2nd at UNBC that was lead by the Iranian community of UNBC ( soon to be UNBC Iranian Student Association). We received so much positive feedback, and you guys showing up for events like this is an example of fighting for a better world.

I would like to end my article with a piece from a persian poet Saadi Shirazi on humanity:

“Human beings are body parts of each other,

In creation they are indeed of one essence.

If a body part is afflicted with pain,

Other body parts uneasy will remain.

If you have no sympathy for human pain,

The name of human you shall not retain.”