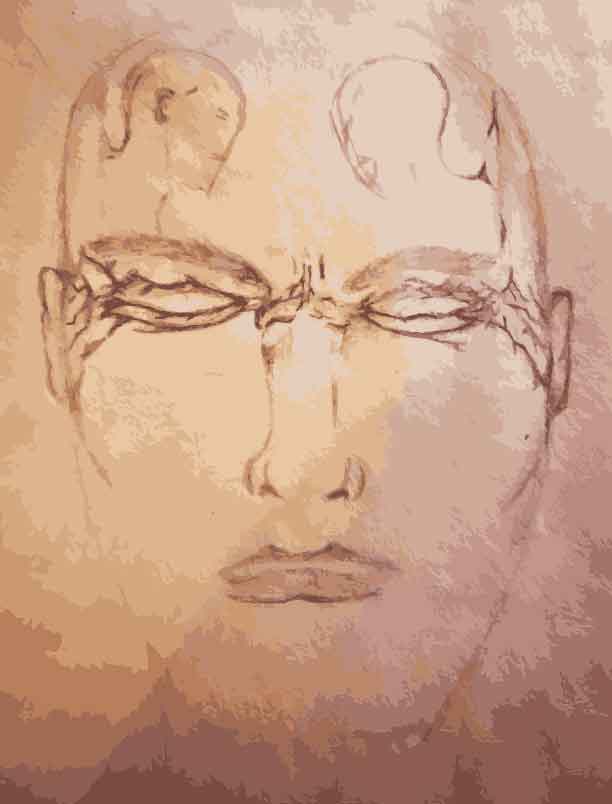 Last time Artyom Fabritsius told us what a “Phase” is. Everything that can be heard about the “Phase” will remain at the level of conversation until, one day, a person accidentally or intentionally encounters it. In the project of Mikhail Raduga “Elijah,” at the moment, there is an active study of the work of the brain during sleep, says Fabritsius. As one of the results, a connection was found between the work of the lower hemispheres during a person’s sleep and people who are awake and have schizophrenia. The brain areas responsible for human consciousness and the parts of the brain responsible for “fantasy,” in people in the phase, work very similarly with people with schizophrenia. The study showed that people with schizophrenia are people with a brain defect. Their consciousness is very active, but the brain parts that “sleep” while awake are working. In essence, people who have this disease are people who, as it were, cannot escape from their nightmare cannot wake up. The potential is being developed to help people with schizophrenia and a tendency to it.

Are there any other studies underway? Artyom says that psychological potential and boundaries are being studied and directly reflect the brain’s work with actual diseases. As already mentioned in the first article, you can simulate any situation in the phase. The main thing is not to forget that you are dealing with your brain and subconscious, but no more! There is nothing mystical or unnatural about this phenomenon. Once a task appears in the project: you need to get into the phase to meet your phobia and then describe your feelings and feelings. This study was supposed to cover the analysis of the potential of human fear, and in subsequent research, to show the way of psychological struggle with it, Fabritsius claims. One of the experimenters encountered a problem – he did not have any phobias. For more than two days, he pondered what could cause him fear. He was not afraid of insects, the sight of blood, sounds, weapons, cars, speed. He also had no allergies. It was difficult for him to cause fear. He decided to do the following: get into the phase, and perhaps his subconscious will give him his fear itself. Night has come, the experimenter enters the phase. The degree gives him his old school, where he studied before. The school was empty. There were no people in it. The experimenter began to walk around the classes and peer into the details. The school and its surroundings were quite ordinary. The experimenter’s subconscious showed him his school in the captured form. And it would seem that the phase would be useless, when suddenly, in one of the classes, an experimenter noticed a TV, which had never been in this class. The TV was on, and there was a program about outer space.

Suddenly, the experimenter remembered being tormented by nightmares associated with open space as a child. He had dreams that he was flying into the sky and could not return. It scared him very much. As an adult, he, of course, forgot all this, and it would seem that about twenty-five years have passed, and now in the phase, his subconscious reminded him of his childhood fear. Immediately, as if by a click, he found himself in outer space. As the experimenter pointed out in the report, he was seized with frantic feelings of horror. A dull emptiness, a sense of cold, and complete darkness, in the distance of which, somewhere, the planet Earth was visible.

In nineteen fifty, a study was conducted by the Canadian neurosurgeon Wilder Penfield. A neurosurgeon applied current to the brain’s temporal lobes to determine its boundaries in one of his works. The neurosurgeon, in this work, operated on a patient with a brain tumour. With certain combinations of current supply, the patient suddenly screamed and claimed that she remembered fragments of her childhood. Moreover, I placed them superficially and in minor details. This study, one of the first in scientific reality, led to the idea that the human brain remembers and records everything, says Artyom. From here, the famous belief came that before death, a person sees his whole life in a matter of seconds. At the deadly border, the brain begins to work unpredictably and sometimes activate its full potential, as well as the fate of human memory.

Maybe a person can access these brain resources through the phase? Artyom says that the phase reports have shown that the human brain remembers past information in detail and analyzes the data in combination with emotions. At the same time, your subconscious is always ready to offer you an answer to the question that interests you. Such reports come in hundreds per day, sometimes thousands per week. Experienced experimenters analyze the entire volume of information. A conclusion and hypothesis are made about the work of the subconscious and the theoretical development of a potential solution to a particular psychological problem.

The project is working on a vast number of experiments. Unfortunately, it isn’t easy to describe briefly all the essential desserts and scientific works published by the project.

Every year more and more people face the phenomenon of the “Phase,” Unlike past times, today, there is a reasonably clear explanation of what exactly a person is facing and, most importantly, what to do with it. Fortunately, today we have a full range of scientific approaches to issues that previously seemed beyond mysticism. Science is the engine of progress.