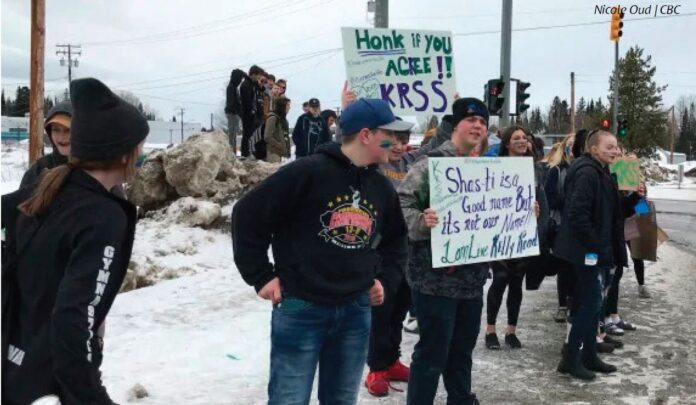 On Tuesday, February 25th, Prince George Matters reported live on various forms of social media that the School District 57 School Board had voted to begin the process to change the name of one of Prince George’s local secondary schools from Kelly Road Secondary School to Shas Ti Secondary School. The SD57 school board had been looking for a way to acknowledge the traditional and unceded territory in a public way for some time. This decision was the result of L’heidli elders and representatives Clifford Quaw, Kenora Stewart, and Dayi Pountney approaching the board at a public meeting that evening and telling the story of their ancestral land followed by a proposal to change the name as part of the truth and reconciliation process. Their story of the grizzly bear corridor, its long-standing relationship with the people and nature, and even specific bears that used the land frequently until it was transformed into an urban space was blended with personal memories from those present.

“I remember vividly, as a young girl, my grandfather telling us stories of his hunting journey on the land and how it was known as one of the great berry-picking areas and how the berries and vegetation attracted to many bears including grizzlies,” said Stewart.

“He would tell about how grizzlies would roam through what is now the Hart Highlands and UNBC looking for food and berries to withstand them from throughout the winter.”

The proposal was met with enthusiasm and excitement by the school board, who voted unanimously to accept the proposal to change the name of the school to reflect the historical use of the land on which it stands. This process is not something new to the district, the school following a similar road that schools such as Lakewood Junior Secondary, John McInnis Junior Secondary, Carney Hill Elementary, and various other educational institutions have experienced over the past decade or so. Although the initial reception of this idea was positive, however, it seemed that the moment the news was released publicly there were particularly emotional reactions from people all over Prince George, and particularly in the Hart community.

The sharing of traditional knowledge with the school board was a positive experience for many, but there have been distinctly mixed feelings from the general public. The next day, over one hundred students from Kelly Road Secondary School walked out of class to protest the name change. The day after that, the same group of students, this time joined by many of their parents, held a similar protest at the School District office on Ferry Avenue. The Hart community recognizes Kelly Road Secondary School as a staple of history and connection that has spanned several generations of students and faculty. Many complaints have centered around the idea that there should have been more consultation between the School Board and the Hart community prior to any decision-making action.

While many agree that the decision was sudden, it is also clear that the school district has been seeking a means to symbolize truth and reconciliation in local education for quite a while. With the construction of the new Kelly Road Secondary School building slated to be complete in time for the beginning of school September of 2020, the plans to rename the school are conveniently timed. By acting now, the school district will avoid a great deal of cost in changing the name.

It is, of course, acceptable that both supporters and opposition to the name change have a right to their opinion, and when opinions are expressed respectfully, situations such as these can be handled quickly and carefully. In fact, both parties may be able to reach a compromise. Unfortunately, respectful expression has not exactly been the case.

Since the news broke on Tuesday night, many parents, students, and others sharing their opinion on social media have underlined their statements with heavily racial and bigoted undertones. Learners with disabilities, visible minorities, and other groups have been attacked vocally and over social media, the effort spreading like wildfire on platforms such as Snapchat, Facebook, and Twitter. Many people have been reported for disrespectful language and threats of violence, not just to website administrators, but to local RCMP.

I believe that the name of a place shares a significant connection with the community that lives, works, and plays there. Certainly, that must have been the case for the thousands of years that Indigenous peoples built a relationship with the area, just as it is the case for the diverse population found in the same place today. In fact, it is likely that a school was chosen for the renaming because of the weight it carries in today’s society. Regardless of reasoning, or which side of this issue you associate with, however, there is no place to attack others based on race, religion, history, or creed. Whether you believe that the renaming to Shas Ti (Grizzly Den) Secondary School is an honour or a misjudgement, it is not your right to diminish others. As a learner who has lived in Prince George for the majority of my life, I only hope that this altercation can be resolved in the most peaceful and respectful way possible. Seeing the trials and tribulations that First Nations peoples across Canada have faced for over a century, it shames me to see that in our failure to listen to one another, we are creating pain instead of opportunities.

What are you Wearing? Are Your Denim Jeans and Leatherwear Environmentally Friendly?