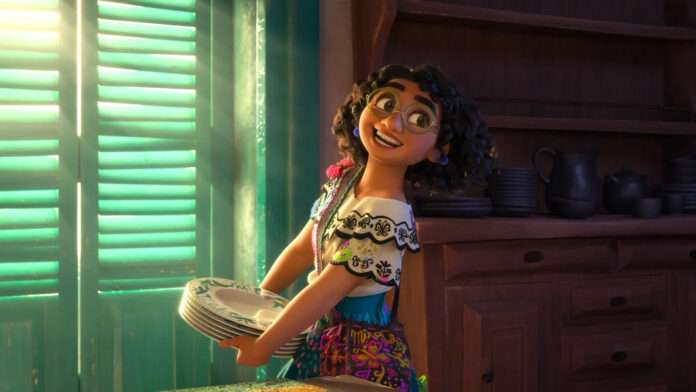 Encanto is the most recent release from Disney and is garnering wide success, in part due to the representation of on-screen diversity in the film.

Encanto is a digitally-animated musical comedy produced by Walt Disney Studios and a soundtrack by award-winning songwriter Lin-Manuel Miranda. The movie was digitally released on Disney’s streaming platform Disney+ in December 2021, after a 30-day theatrical run. Despite the shortened theatrical run due to COVID, Encanto was the highest-grossing animated film of 2021.

The plot follows a blessed family where everyone has a unique magical gift, except for 15-year-old Mirabel Madrigal. We see Mirabel, voiced by Stephanie Beatriz (Brooklyn Nine-Nine), attempting to save the miracle while navigating her odd-ball status in the family. Pre-production of Encanto included a two-week, fully-immersive trip to Colombia. The production team directly experienced and learned about Colombian culture; After the trip, the Encanto production team hired their tour guide as a cultural correspondent. The resulting story is historically appropriate, culturally sensitive, and remarkably diverse. Each character and setting is expertly crafted and uniquely Colombian. Indeed, the global pandemic heavily impacted the production of Encanto, and much of the film was completed using remote working conditions. So, just like most of the world, animators and voice actors were forced to work through Zoom.

Encanto is already a critically-acclaimed film, garnering several award nominations and winning the Golden Globe for Best Animated Feature Film in 2021. A large contribution to the positive reviews for Encanto is the film’s genuine portrayal of Afro-Latin culture. According to a 2019 dissertation by Arielle Lanae Akines of the University of Houston, Texas, the Afro-Latin community is incredibly diverse. Participants in their study identified as both Black and Latino/a, with various sociolinguistic distinctions that characterized their identity. These factors included (but are not limited to) language, dialect, hair texture, skin colour, regionality, religion, political activism, music, and cultural heritage (Akines, 2019). Indeed, the researchers noted that an Afro-Latin identity cannot be reduced to simply a Black person who speaks Spanish; there is rich cultural diversity within the Afro-Latin community.

Furthermore, of the 55 participants, 100% believed there was a lack of Afro-Latin representation in media and 94% reported experiencing discrimination based on their skin colour. One startling conclusion of this research is that Afro-Latin individuals felt excluded in the United States, without a place to call their own. The researchers recommended the release of media focusing on respectfully portraying dark-skinned, kinky-haired, and multilingual characters on-screen. Encanto delivers on this call-to-action, and the film provides a representation of the Afro-Latin community that has never been showcased in a Disney movie to date.

Encanto accurately and compassionately portrays many diverse communities, not just the Afro-Latin community. Individuals with textured hair can see themselves in the Madrigal family. Every character in Encanto has a unique character design, including their own hair texture. Hair textures, from straight to wavy to coiled, are respectfully represented on screen. Furthermore, a variety of hair colours are portrayed in Encanto, highlighting the diversity of human hair and the beauty of our unique locks.

Encanto even portrays spirituality on-screen. The story manages to incorporate metaphysical mysticism without adhering to a specific religion or set of practices. A fan-favourite character, Tio Bruno, is often depicted throwing salt over his shoulder or knocking on wood (which are superstitious practices for good luck). Moreover, Encanto navigates spirituality and religion while emphasizing that people have individual agency in their lives.

Another community subtly represented in Encanto is the bisexual community. The voice actor of Mirabel, Stephanie Beatriz, is an openly bisexual woman (which means she is attracted to people of multiple genders). Beatriz encouraged the character design of Mirabel to be inspired by the bisexual pride colours: blue, pink, and purple. Mirabel’s attire follows this colour scheme, and a small tricoloured rainbow embroidered on Mirabel’s top also depicts bisexual pride. It is a small and subtle representation, but this display of proud bisexuality could make a world of difference to individuals who do not adhere to traditional heteronormative standards. Beatriz is a true activist for fighting to represent the bisexual community on-screen, and this effort will help reduce the stigma that bisexual individuals experience.

Finally, viewers are celebrating Encanto for the strong emotionality infused into the story. Characters grapple with anxiety, grief, feelings of worthlessness, and the journey to self-acceptance in a depth that characterizes the emotionality of human existence. The genuine, heartfelt representation of real human emotions will hopefully normalize conversation regarding our most difficult experiences. Furthermore, the inclusion of mental illness symptomology, like anxiety and extreme worry, will hopefully contribute to the de-stigmatization of mental illness. Instead of feeling alone in their worries, children (and grown-ups!) can associate their experience with strong and empowered characters in Encanto.

I truly hope this piece has inspired you to watch the beautiful film that is Encanto; I have never had such a visceral and personal response to a Disney movie. Whether your connection is related to cultural identity, spirituality, hair, sexuality, or emotionality, I guarantee that every person will see themselves in this movie. Indeed, if you cannot relate to any of these concepts, consider the fact that Encanto was produced during our global pandemic; I’m sure we can all empathize with the frustration that online work can bring.

Abre los ojos and see yourself represented on screen!

What Role do Families Play in Development of One’s Personality?