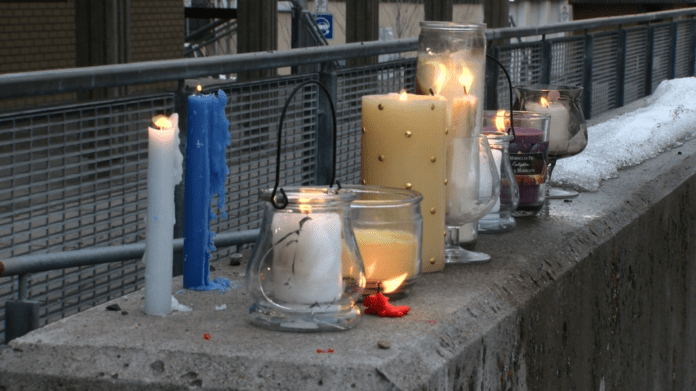 On March 17th, UNBC’s very own South Asian Student Society quickly and spectacularly organized a vigil for the victims of the horrendous attack on mosque-goers in Christchurch, New Zealand. Over 150 people attended, and it was heartwarming to see the community come together to support the PG Muslim community.

South Asian Student Society executive and young Muslim, Fizza Rashid led the vigil on the steps of town hall. She spoke about the attack and spoke of the victims, particularly the one killed after greeting the gunman with “Hello, brother.” Fizza also discussed the Australian politician that blamed immigrants for the attack in Christchurch and how Trump refuses to acknowledge white supremists as a real problem. Fizza first encountered racism at a young age after the 9/11 attacks when she witnessed a person come up to her mother and tell her to go back ‘home.’

“There’s always that little seed of fear planted within me,” she said, ‘especially after things like this and the Quebec shooting a couple years ago. But ever since I’ve been [in PG], it’s been seven years, and everyone has been incredibly kind and supportive and welcoming.”

Mayor Lyn Hall, MLA Shirley Bond and chairperson of the Prince George chapter of the B.C. Muslim Association Mostafa Mohammad also spoke. The non-Muslim leaders reiterated their support for the Muslim community, while Mostafa led the group in a prayer for the deceased.

Neelam Pahal also spoke emotionally on behalf of the Sikh community and extended her support for the Muslim community. She could not believe how someone like the terrorist, could have so much hatred and have the boldness to kill so many innocent lives.

I also had the wonderful opportunity to speak at the vigil. For those who are interested in hearing what I had to say, my words are below:

Greetings of peace and mercy to all my brothers and sisters that are here. All of us in humanity are one big family, so on behalf of the Muslim community, thank you to everyone who is here today to show their support for the Muslim community and thank you to those who were not able to make it but are keeping us in their thoughts and prayers. It means so much to me when I see the community I grew up in support me and my community, and stand by us during these times of sadness and fear. Thank you so much.

“Whoever kills an innocent person, it is as if they have killed all of humanity” [Quran 5:32]. It doesn’t matter what faith.

Inna lillah wa innah ilayhi rajeoon – You are probably reading that a lot in social media posts and hearing it from Muslims, and it is our way of remembering that we are God’s creation and upon death we return to him. May the Muslims that were slain in this terrible attack lay in rest and peace and may God full their graves with light and god willing be of the dwellers of paradise, as we believe anyone killed unjustly will enter paradise.

May God strengthen those who have lost family, friends, love ones, colleagues, community members to this atrocious incident. I am sure words cannot describe how they are feeling, and may God help them and give them patience to make it through these tough times. I cannot imagine how people, the Muslims and especially the youth of Christchurch and New Zealand are feeling.

It feels like attacks like this are happening all too often, and not just against Muslims. It was just two years ago I was in this very place attending the vigil for those slain in the Quebec mosque shooting.

As a young Muslim who has lived just about all my life in Prince George, I have never been afraid to be a Muslim, to show that I am a Muslim or say that I am a Muslim, and I am very fortunate for that. I am a frequent goer of the mosque, and I have never felt afraid to go, but rather always excited and I always expect it to be a safe place. Thank God we’ve had a wonderful community here in PG.

Yet, Islamophobia is such a very real problem. Discrimination and racism are very real. Extremism and hate are present in the world around us. No city is immune to this. It is our job, for those of us here, to spread love and peace, no matter who we are. Every life is important whether it be Muslim, Christian, Jew, Atheist or no religion at all. We must look past our differences and look instead at the things that connect us and bring us together.

To my fellow Muslim community members, stay strong and do not fear. This is our opportunity to open our doors and for people to learn about us. Just one month ago we had our open mosque and people from across the community were so eager to meet us and witness our place of worship. We must keep the avenues of dialogue open because our biggest fear is not of terror but of ignorance. Continue to be active members of the Prince George community and know that your community supports you. And to the young Muslims specifically, your futures are in your hands. Don’t be afraid to say you’re a Muslim, and don’t be afraid to show that you’re a Muslim because the majority is here to support you and God will be with you always.

To the greater Prince George community, thank you again for your overwhelming support and for standing by us during this tough time. It will take all of us together to create a world of peace, acceptance and understanding. We must show to those who have hatred in their hearts that terror is not the solution and that our voices will be stronger than theirs, as our voice is the voice of love, peace, and unity.

May we one day, god willing live in a world in which no person, be them a person of faith or not, Muslim or not, never fear to walk out of their home or fear going to a place of worship. May God help and guide those affected by this terrible tragedy. Thank you and God bless you and strengthen you all.