MMIWG Memorial Marches Across BC 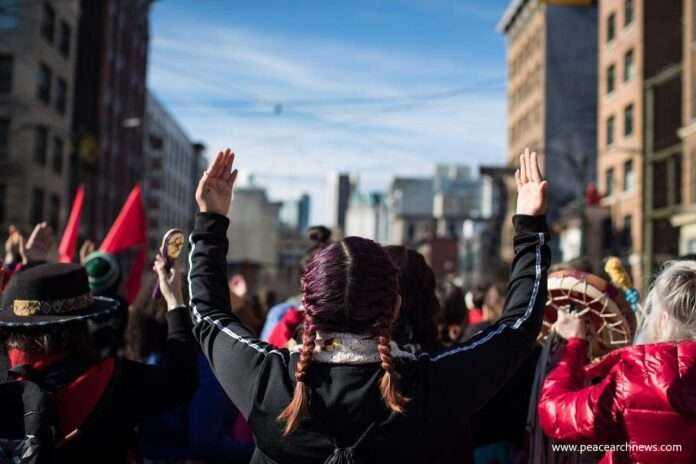 In light of some recent political demonstrations in British Columbia and across Canada, I would like to bring awareness to a set of peaceful protests across our province. On Monday, February 14th, 2022, Memorial Marches for Missing and Murdered Indigenous Women and Girls (MMIWG) will occur around BC. Notably, the 31st annual MMIWG Memorial March will happen in Vancouver’s Downtown Eastside. Additionally, the first-ever Highway of Tears Memorial March in Terrace BC is on February 14th, prompted by the demonstrations in the lower mainland.

The Vancouver MMIWG Memorial March will start at Main and Hastings and proceed through the Downtown Eastside on February 14th. This event, organized by women and non-binary people, recognizes Indigenous women, girls, two-spirit, and trans people who face disproportionate levels of physical, mental, emotional, and spiritual violence. The event was originated and continues to take place on the unceded territories of the xʷməθkʷəy̓əm (Musqueam), Sḵwx̱wú7mesh (Squamish), and Sel̓íl̓witulh (Tsleil-Waututh) Nations. The demonstration in the Downtown Eastside will include speeches from family members of the missing and murdered, as well as a healing circle for those impacted by violence against Indigenous peoples. The Vancouver MMIWG Memorial March will be available to watch via livestream on their Facebook and Instagram pages.

The first Women’s March was in 1991, after the gruesome discovery of a woman’s remains in the Downtown Eastside. The small memorial event, organized by women, was to grieve and show compassionate recognition for all MMIWG. Now, the annual march in Vancouver attracts thousands of visitors (or online viewers, during pandemic years), and the Vancouver MMIWG Memorial March has prompted the organization of similar events on February 14th across Canada. The message of recognition for MMIWG has certainly extended into the North, with the Highway of Tears Memorial March to transpire in Terrace on February 14th (coinciding with the Vancouver MMIWG Memorial March). Terrace BC resides on unceded Tsimshian territories, the traditional home of the Kitselas and Kitsumkalum First Nations. Families of MMIWG from Northern BC will march through downtown Terrace and gather at the MMIWG memorial totem pole near Kitsumkalum, showing solidarity for the Indigenous women, girls, and gender-diverse individuals that have gone missing in the North.

According to an analysis on epistemic injustice by Marjorie Johnstone and Eunjung Lee of the University of Toronto (2021), Indigenous women face disproportionate instances of epistemic injustice compared to the general Canadian population. This research noted that the rate of violence against Indigenous women is double that of Indigenous men and triple that of non-Indigenous women. For over a decade, United Nations human rights committees, Amnesty International, and Human Rights Watch have encouraged a national inquiry into the epistemic injustices faced by Indigenous women in Canada. Finally, after years of encouragement from international commissions, Canada conducted the Federal Inquiry into MMIWG between 2016 and 2019. The final report of the MMIWG inquiry from November 2019 declared that the epidemic of violence against Indigenous women, girls, and gender non-conforming individuals to be genocide occurring on the Canadian scale. Also, the final report included 231 Calls For Justice that address the genocide against Indigenous women, girls, and gender-diverse people in Canada. These Calls For Justice specifically tackle concepts and conversations regarding historical, multigenerational, and intergenerational trauma; social and economic marginalization; maintaining the status quo and institutional lack of will; and ignoring the agency and expertise of Indigenous women, girls, and 2SLGBTQQIA people.

Page 199 of the final report of the federal Inquiry into MMIWG includes 8 Calls For Justice that can be implemented by Canadian citizens. I encourage you to read through these and determine which are most personally meaningful. For me, three Calls For Justice stood out as particularly useful in addressing the genocide of Indigenous peoples in one’s daily life.

Next, we can implement the Calls for Justice by learning the true history of Canada and the Indigenous history of your local area. With an open mind, begin to learn about the stories, beliefs, and practices that characterize the Indigenous peoples in your area. In what is known as Prince George, we reside on the traditional and unceded territory of the Lheidli T’enneh.

Finally, combatting epistemic injustice will require us to confront and speak out against racism, sexism, ignorance, homophobia, and transphobia and encourage others to do the same. Undoubtedly, the violence faced by Indigenous women, girls, and 2SLGBTQQIA people is an indication of systemic inequalities that exist in society. By addressing all avenues of discrimination, we can encourage a safe and just country for all Canadians.