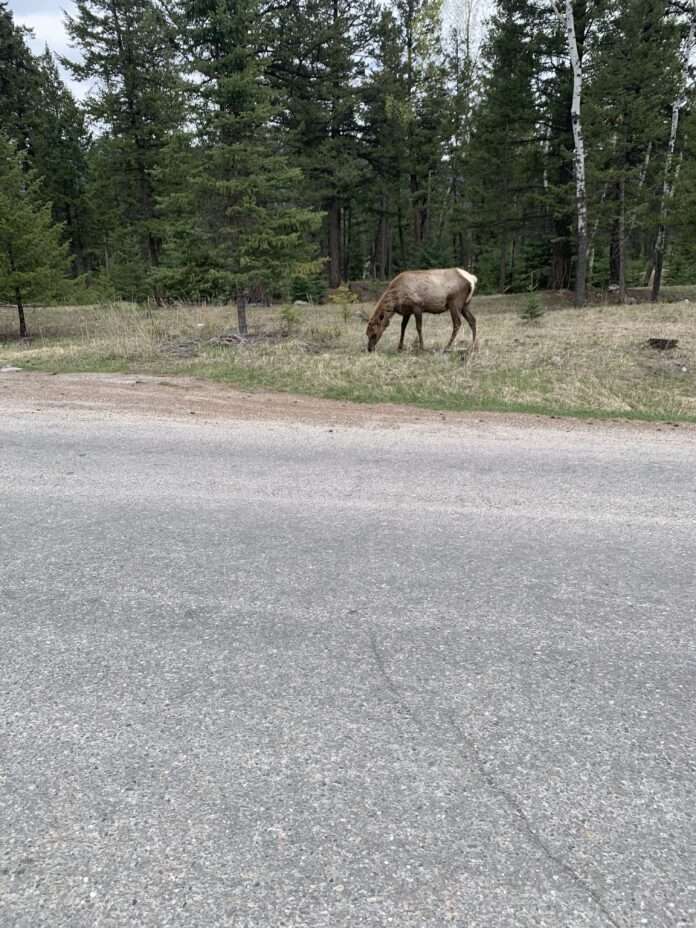 What makes the UNBC campus special? Is it a beautiful view of mountains, an open layout of buildings with lots of natural light, or maybe a lovely lake just minutes away? While all these things make our campus unique, in my opinion, the opportunity to meet a bear or moose on your way to class makes the UNBC campus stand out among many others. If you are from a big city or a different country, a chance of meeting a bear can be scary or exciting or both at the same time. While some of you might want to take a selfie with a bear or moose, others might decide to run away as fast as possible. It might surprise you, but none of these ideas would be a wise choice. Because there are significant chances you will encounter a moose, deer, or bear on campus at least once during your time at UNBC, it is vital to know what to do to stay safe. Here you can find some basic guidelines of what to do when you meet an animal on campus so you won’t be as scared and lost as I was once.

Let’s start with the bears because they might be the scariest representatives of wildlife you might encounter on campus. First, if you see a bear in the distance, don’t try to get closer to it to take a picture, especially if it is a cub. It might seem that a baby bear is not a threat to you, but the mama bear is a huge threat. And even while you might not see the mama bear immediately, be sure it is somewhere close to the cub. Second, don’t try to run away from a bear as it might start chasing you. No matter how fast you think you are, it is not fast enough to run away from a bear, as on average, they can run 100m in 7 seconds. For your reference, the Olympic record for 100 m is 9 seconds, so one more time. Climbing a tree is also not a good idea, as bears are better climbers than humans. Another thing you might do unintentionally is to scream, which you should try not to do to avoid scaring the animal.

So you shouldn’t run away, climb a tree, or scream; what should you do then? The most important thing is to stay as calm as possible, then slowly back away. Avoid direct eye contact with a bear, but make sure you can still see where it is. It would be best if you also tried to make noise talking to a bear in a loud but calm voice. At the same time, you should put your hands above your head to make yourself appear very big, but remember not to make any sudden movements. If you are in a group of people, stay together and be loud. Once the bear runs away, go to a safe place indoors and let security know that you have seen a bear on campus. Remember, bear attacks are not typical, and like most wild animals, they will try to avoid you, but you still need to act accordingly to be safe!

Now let’s talk about moose. It might seem that moose are not dangerous, but it is a false perception. They can be as dangerous or even more than bears. And while you won’t meet bears during the winter, you can most definitely see moose all year long. Like many other animals, moose will likely run away when it sees you. However, in some instances, it can keep staring at you or even get aggressive. Multiple warning cues suggest that the animal is in more aggressive mode. For example, its hair stands up, it might start moving its head up and down, lay its ears back, and stump the ground. If you can’t see any warning signs, you should still keep your guard on as the animal’s mood can switch in seconds.

Of course, as a general rule, back up slowly before the moose approaches to give it more space and let it feel safe. However, other suggestions of how to behave when meeting a moose differ from when you meet a bear. Unlike meeting a bear, you shouldn’t try to hold your ground when encountering a moose. And if it charges at you, run away as fast as possible. When possible, hide behind a big object such as a tree or car. If a moose reaches you before you get a chance to hide, play dead by laying down and protecting your head and neck.

The next animal you are highly likely to see on campus is deer. Deers are not aggressive animals; if they see humans, they will most likely quickly run away. Even though these animals seem least dangerous, you should still follow all the basic safety rules, such as not approaching the animal to take pictures or pet it and slowly back away to give it more space. Also not common, but sometimes deers can get more aggressive during their mating period (September to December). If the animal starts acting more aggressively, follow the same rules as when encountering a moose.

While it’s not likely for you to meet a cougar on campus, it doesn’t hurt to learn what to do when you encounter one of the deadly species. If you see a cougar slowly back away while looking the animal in the eyes. As with bears, don’t run and don’t turn your back on the animal. Try to make yourself look big and make noise so the cat doesn’t confuse you with prey. Before the cougar starts approaching, you can try to throw rocks or stick in its direction but not at the animal. In case it attacks you, fight with all your power and never play dead!

While animal attacks are not very common, you should know the basic rules for staying safe and protecting yourself. For example, when going for a walk in the woods, don’t use your headphones and try to stay loud. When walking around the campus, be alert. Remember to remain calm and slowly back away to give more space between you and an animal when you see one. Now, as you know the basic guidelines when encountering wildlife, you won’t be lost or paralyzed.