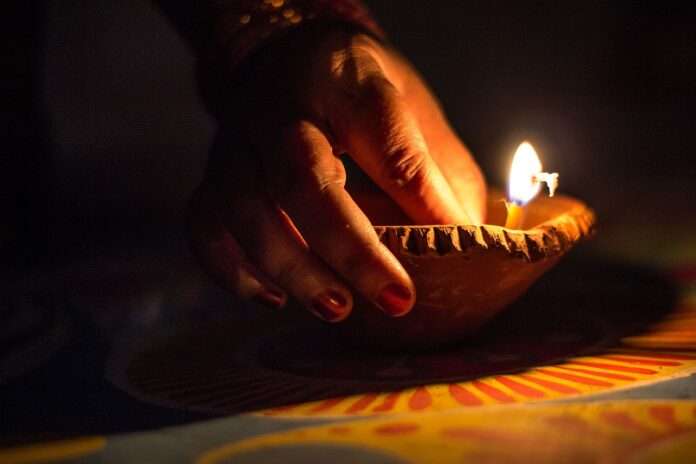 Diwali, also known as the festival of lights, is one of the most important festivals in India. Comparable to the celebration of Christmas in western cultures, Diwali is widely observed among more than a billion people across India and all over the world from a variety of faiths. In essence, the festival upholds the idea of illuminating our inner selves with clarity and positivity while eradicating negative emotions and self-doubt.

Diwali or Deepawali gets its name from the row (avali) of clay lamps (deepa) that celebrators light outside their homes to signify the triumph of spiritual light over darkness. The festival promotes togetherness, hope, success, knowledge, and good fortune.

Diwali is so widely celebrated by several major religions around the world that it has no single origin story. Hindus, Sikhs, Jains, and Buddhists all observe the festival with their own historical narrative behind the holiday, ultimately celebrating the victory of good over evil.

As the world’s oldest living religion and dating back to the second millennium B.C, Hinduism alone presents several versions of the origin of Diwali that vary among geographic areas. Most of the stories, however, are epic tales of victory won by the incarnations of the Hindu God Vishnu who is considered as the great maintainer of the universe and restores the balance between good and evil in times of trouble.

In North India, the legends commemorate Diwali with Lord Ram’s triumphant return to the city of Ayodhya with his wife Sita, and brother Lakshman, after spending 14 years in exile and defeating the King of Lanka, Ravan, who kidnapped Sita. In South India, the victory of Lord Krishna, another incarnation of God Vishnu, over the demon king Narakasura, who had imprisoned 16,000 women in his palace and inflicted out harsh punishments to any of his subjects who dared stand up against him, marks the celebration of Diwali. The festival is also celebrated to honor the day Mother Goddess Durga destroyed a demon called Mahisha, who had the boon that “no man or animal could kill him” and was creating havoc in the heavens.

In Sikhism, which is one of the youngest world religions and was founded a little more than 500 years ago, Diwali marks the release of the sixth Guru, Guru Hargobind Singh, along with 52 other prisoners who were wrongfully imprisonment by Mughal emperor Jahangir. This day is celebrated as the Bandi Chhorh Divas or “Prisoner Release Day” and is seen as a triumph of right over wrong. It is a tribute to the Guru who saved the lives of the 52 innocent men without violence. Another reason for Diwali to be a day of celebration for Sikh religion is that the foundation stone of the most holy place in the Sikh world, Golden Temple at Amritsar, was laid on this day in 1577.

In Jainism, which is an ancient religion that is almost 2,500 years old and shares many of the beliefs of Hinduism, Diwali is observed as the day that Lord Mahavira, the 24th and the last of the great Jain spiritual teachers, reached nirvana or moksha. It marks the end of the year for the Jains.

In Buddhism, although nor as a primary festival, Diwali is celebrated to memorialize the day when the Hindu Emperor Ashoka, who ruled in the third century B.C., converted to Buddhism and the day is observed as Ashok Vijayadashami. They celebrate by lighting lamps, decorating temples and monasteries, and worshipping the Buddha.

No matter the reason, Diwali promotes a sense of togethers and harmony amongst different cultures. It is more than just lights and legends; it is about having some quality time with friends and family. People dress up in their finest traditional outfits, exchange presents, enjoy delicious delicacies and sweets, and watch firework displays.

The week of Diwali is filled with prayer, feasts, fireworks, family gatherings, and charitable donations, generally preceding with people deep cleaning their homes. On the day of Diwali, everyone wakes up early, slip in their fancy clothes, and begin the decorations by drawing rangolis. Sometime around dusk, every household begins to lighten up with diyas, candles, lights, lanterns and more, and ready for Lakshmi puja. Soon after, the dark sky is lit up with sparkling fireworks. Devotees of Maa Lakshmi (the Goddess of wealth and fortune) also follow the tradition of keeping the doors and windows open to welcome the Goddess.

Outside of India, the largest celebration of Diwali is held in the city of Leicester of the United Kingdom with tens of thousands of people gathered in the streets to enjoy vibrant shows of light, music, and dancing.

Standing Still: Who’s Side Are You On?