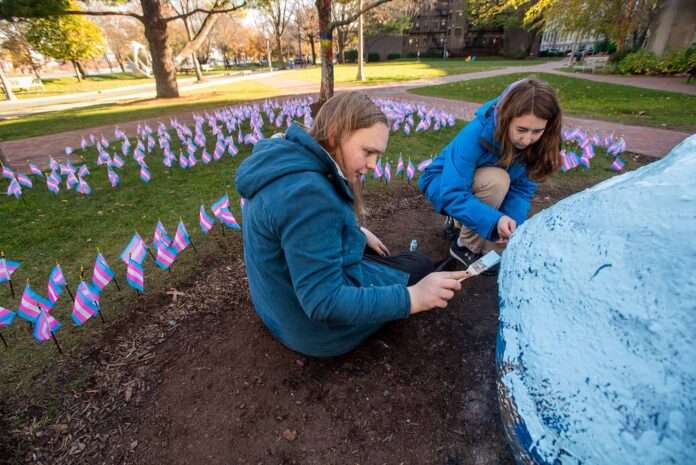 The first observance of TDoR was in 1999 when co-founder Gwendolyn Ann Smith organized a  memorial for the murder of Rita Hester, a 35-year-old transgender African-American woman in  Allston, Massachusetts. The grief of Rita’s murder was shared by over 250 people, who joined a  candlelit vigil to celebrate Rita’s life and mourn her tragic loss. By 2010, TDoR memorials were  held in more than 20 countries.

Generally, a TDoR event would consist of reading out the names of all the transgender  individuals lost over the previous twelve months. This observance has even made its way into  governance: since 2017, the Ontario provincial government observes a moment of silence on  November 20th in recognition of TDoR; On November 18th, 2021 on the United States House  floor, Representative Ayanna Pressley read the names of 46 trans people murdered in 2021. Such  demonstrations of governmental support are integral to reversing the discrimination against  transgender individuals.

Despite the widespread support of TDoR, some critiques have arisen. Indeed, some people  question the intersectionality of TDoR. Intersectionality is the understanding that many aspects  of identity intersect to create a particular person’s experience. According to critics, TDoR can  potentially ignore other aspects of a person’s identity that contribute to oppressive violence,  inflating transphobia as the only discriminatory factor. This reduction ignores that a  disproportionate majority of murdered transgender people are trans people of colour. Therefore,  scholars and activists are committed to advancing intersectional approaches in trans politics,  highlighting transphobic violence as inseparably connected to race, gender, and class. There are many ways to get involved in TDoR observations. First and foremost, be aware of the  effects of transphobic violence on the 2SLGBTQ community. Share our grief and recognize the  thousands of transgender lives forcefully stolen due to hate. Especially in Canada, we must  acknowledge the inherent connection between transphobic violence and European colonization:  that 2-Spirit Indigenous people face intersectional oppression due to their identities as  2SLGBTQ and Indigenous. If your community is not hosting a TDoR vigil in person, consider  looking for events online. The Transgender Day of Remembrance Vigil – Reading UK event will  be live-streamed via their website (www.tdor-reading.org.uk) at 11 am PST on November 20th.  Also, the Project Rainbow Transgender Day of Remembrance 2022 live-stream, organized by the  Salt Lake City Public Library, can be accessed through youtube (https://www.youtube.com/ watch?v=eiOL3NjOUAU) at 2 pm on November 20th. I sincerely hope that readers of this article  will spend time in recognition and mourning of the lives lost due to transphobia, and they take  steps to heal discriminatory transphobic violence in our communities.