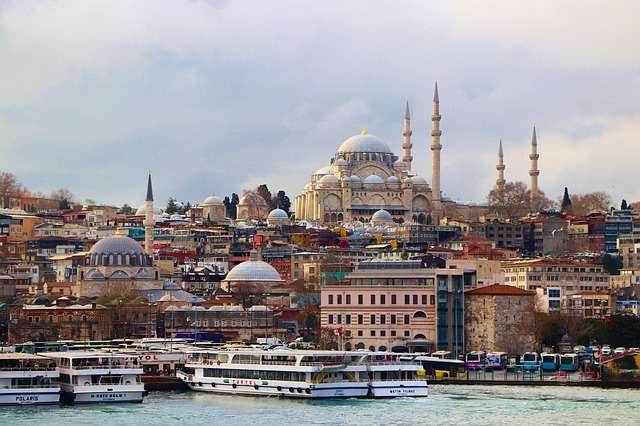 Turkey is one of the most important tourist destinations around the world, as it is rich in world heritage and natural landscapes that constitute a unique beauty. From coffee and Turkish food that became famous worldwide to the archaeological monuments and architectural masterpieces sprawled in a creative artistic way in its old streets and on the banks of its rivers and seas. Turkey offers to its visitors the most beautiful scenes of natural beauty, It is a true example of the combination of archaeological artifacts and picturesque landscapes that dominate tourism lovers. When we talk about the beauty of Turkey, Istanbul remains at the forefront of beautiful cities, not only in Turkey but in the whole world, Because it has the privileged location on the shores of Asia and Europe and the link between the two continents. With these privileges, it deserved, to grab a place among the most beautiful and most developed cities in the world; Istanbul gathers in its streets the fragrance of the past, the splendor of nature and the modernity of the present.

Istanbul is the cultural, economic, touristic and financial center of Turkey and it surrounds the natural harbor known as the “Golden Horn”. It overlooks from the north the Black Sea and from the south the Marmara Sea. This city blends East and West in its landmarks, it is a treasure full of precious culture, civilization and diversity as The Bosphorus Strait splits it into a European section and an Asian section.

Istanbul has two main airports: Sabiha Airport, which was named after the first woman to fly a fighter jet and Istanbul International Airport, which was established on October 28, 2018 as a replacement for Ataturk Airport. The airport is located in the Arnavutkoy area in the European section of the city; It is equipped with the most important modern technologies, which made it one of the most important and overcrowded airports in the world.

Istanbul combines the past and the present, between calm and noise, between the serenity and hustle of life, between the antiquity and antiquity of the past, and between development and keeping pace with technology. That is why we are going to talk about the most important sites and areas that you must visit when you come to Istanbul in both the Asian and European sections, which are linked by a network of modern transportation routes including buses, tramways, metrobus lines, subways and ships as well.

Sultanahmet District: Sultan Ahmed, one of the dazzling areas in Istanbul, which is characterized by the splendor of its ancient architectural designs and the beauty of its buildings , It is also a place where the nobility of ancient history explodes, Sultanahmet bazaars reserve an important place in the world heritage , This is evident in its walls and antique buildings that acknowledge the beauty and creativity of that region  , Also, this region is considered a station for many civilizations that passed through this important geographical spot in Istanbul , Who will have the opportunity to visit the Sultanahmet area He will have the opportunity to see many tourist and historical places , The most prominent of these is the Sultan Ahmed Mosque, which is known as the Blue Mosque because of its unique view of the Bosphorus, which is based on the side of the Sultanahmet market , This historic covered market, which provides its visitors with the pleasure of shopping and the selection of special gifts. 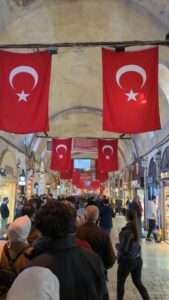 When you wander more in the streets of Sultan Ahmed, you will find Aya Sophia Mosque, which has taken for itself an unparalleled importance due to its occupation of a wonderful site, and its containing the monuments of various civilizations and religions , How can he not, who has gone through many stages, was a church during the era of the Byzantines, then turned into a mosque during the era of the Ottomans, then turned into a museum, then returned to a mosque, a mosque that opens its doors to all visitors to see the effects of this heritage and the distinctive architectural masterpiece . It is considered a cultural, cultural and historical place in and of itself. You will see the amazing ancient drawings and you will sense the symbolic touch on its dome and walls. when you walk by its door. you will have that strange spiritual feeling and you will be amazed by what humanity was capable of hundreds of years ago. 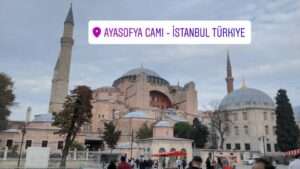 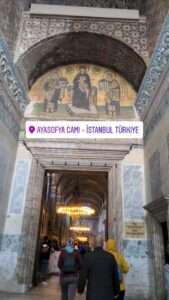 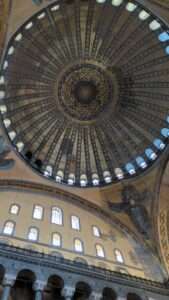 Bosphorus strait: It is one of the most important tourist areas in Istanbul and one of the priorities of tourists, It is a natural waterway separating Asia and Europe. It divides Istanbul into its two parts. its length is 30 km and its width varies between 550 – 3000 meters. In addition to being a tourist attraction, it is considered one of the most important straits and trade corridors in the world Where the movement of ships in it is not less than 50 thousand ships in one direction annually, and this strait of picturesque nature is crossed by three suspension bridges. 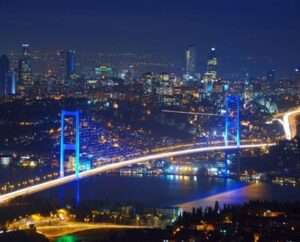 Bosphorus Bridge : its name was changed his name to The 15th July Martyrs’ Bridge, It is one of the most important suspension bridges extending over the waters of the Bosphorus Strait, which was built in 1973 with a length of 1.560 m and a width of 39 meters, linking Asia and Europe, This suspension bridge in terms of length is ranked ninth in the world and third in Turkey.

Sultan Mehmed Al-Fateh Bridge: This bridge is one of the longest suspension bridges in the world, which was opened in 1988 with a length of 1090 meters and a height of 164 meters, And he bore the title Al-Fateh in memory of Sultan Mehmed the Conqueror, who conquered Istanbul in 1453.

Sultan Selim I Bridge : The first and one of the most important suspension bridges in the world in addition to being a wonderful tourist center , It was built in 2013 and is one of the longest bridges with a length of 2164 m, a width of 59 meters and a height of 320 meters .

Princesses Islands: And these islands are undisputedly one of the most famous areas that you can visit in Istanbul. This group of islands consists of nine islands located on the Sea of Marmara and an area of ​​1585 km, And it is a fascinating area for its visitors because it has stunning views and nature that you cannot see anywhere else. Its name goes back to the Byzantine era. Where it was considered a place of exile , Its area varies and is Büyükada island , Heybeliada island , Burgazada island , Kınalıada island , Sedef Adası island , Yassıada island , Sivriada island , Kaşık Adası island , Tavşan Adası island . 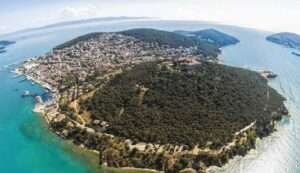 Maiden’s tower: This unique tower is located on an island in the waters of the Bosphorus , And this architectural masterpiece is a destination and a very necessary and important destination for tourists who flock continuously to Istanbul . This sparkling tower between the waves of the Bosphorus is one of the stamps of beauty that Istanbul possesses, It is considered an importantl part of the city’s history, whose story and the reasons for its construction conflicted, sometimes touching myth and sometimes reality. It consists of six floors, with a height of 23 meters, and an exquisite structure, which made it a main facade that dominates the scenes of Turkish films and series. 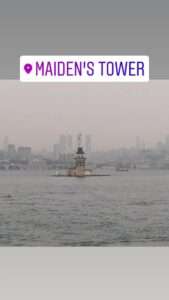 Taksim Square: The heart of Istanbul that beats because of the gatherings of people who like to walk and walk in the 3 km long street, There next to the special corn and chestnut carts, Istiklal Street, as it is called, is hardly devoid of pedestrians and pedestrians there at all times, day and night, in clear and rainy weather. The division is a meeting point between the old buildings dating back to the 19th century and the modern ones. It wraps around its famous square a series of hotels and cafes with wonderful views and restaurants serving Arab, oriental and western foods. It also includes in its streets the old tram stations; In addition to hosting many archaeological monuments that give it a unique beauty and splendour, it is considered a symbol of Istanbul.

Çamlica Tower: The tower is 369 meters tall and 587 meters above sea level. It consists of 49 floors, each 4.5 meters high. The modern and distinctive building makes Istanbul, with its European and Asian parts, like a painting for tourists to see from the tower’s terraces. 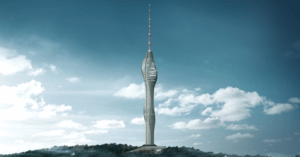 One of the most beautiful and largest shopping centers in Istanbul,  It has a great location near Ataturk International Airport It extends along the shore of the Florya area, one of the most beautiful places in Istanbul, which is crowded with the city’s residents and tourists , Florya Shopping Center opened its doors in 2012 on an area of 50,000 square meters in a privileged location , The center includes an amphitheater overlooking the sea, in which there are 900 seats, in which many activities, events and various shows take place in Istanbul. . Aqua Florya Istanbul includes 145 shops for the largest international and local brands, restaurants, cafes and cinemas , The shops in the center vary, and it includes the most important international and Turkish brands , As for the upper floors, they are specialized in restaurants and Turkish and international kitchens that serve the most delicious food It offers public sessions overlooking Florya Beach to enjoy a wonderful meal while hearing the sounds of waves and planes heading to Ataturk International Airport. 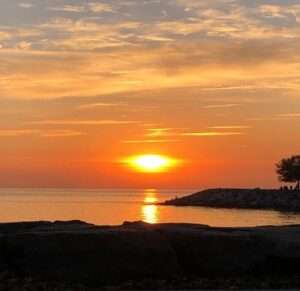 Advantages of medical tourism in Turkey

Tourists go to health resorts in Turkey to benefit from advanced cosmetic treatments. In addition to this, they benefit from spending the most beautiful holidays and receiving these treatments. Medical tourism in Turkey is one of the fastest-growing sectors, especially in the field of hair and dental transplantation. Medical tourism in Turkey is well known for its high quality, great interest in patients, and low prices compared to other countries. According to the Ministry of Health, most hospitals have the infrastructure prepared with the advanced equipment necessary to receive patients from all over the world. Turkey has recently unveiled several initiatives aimed at reducing the costs of health care services for visitors from abroad.